It's no secret that a tourist can have different aims: to go on a beach holiday, to taste local food, to learn about culture or architecture. It depends on the individual preferences of the person. Today, I suggest using a new term - “aroid tourism”, which in fact I have been dealing with for several years, going on trips to tropical countries. As in the case with a restaurant menu, for each region I visit, I make my own “aroid card”. As a rule, it includes both endemics of the area and plants with a wider habitat. The latter can also have their own individuality due to the geological and climatic features of the region. 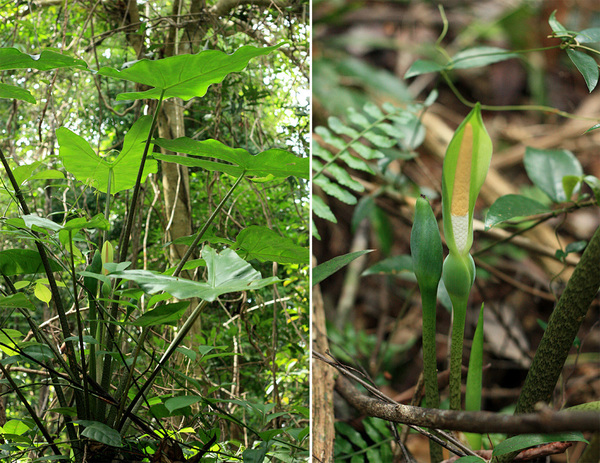 Today I’m trying to compile an "aroid card" of the Vietnamese island of Phu Quoc. It is very easy to do this for an area of just over five hundred square kilometers. It is enough to go to the tropical forest a couple times or to walk some kilometers along the bank of a small river. Aroids live in the tropics either along the river banks or in the shade under the canopy of the rainforest.

Let’s start with the species that are widespread throughout Southeast Asia, and finish with the rather endemic representatives of Phu Quoc, which can be found only on this island and in a few regions of mainland Vietnam.

Alocasia longiloba is a large representative of the Araceae family. It can grow up to 1 m and higher. I had seen this Alocasia earlier in the forests of mainland Malaysia, as well as on the island of Kalimantan. Initially the plant was described by the Dutchman Friedrich Miquel in 1856 on the basis of a specimen collected on the island of Java. Our previous findings were distinguished by a narrow leaf and a striking pattern of the main veins. On the contrary, the Phu Quoc plant has got a wide lamina with a discreet color. The plant compensates for this aesthetic “disadvantage” with a large number of leaves on each individual specimen. The natural biotope of this geographical Alocasia longiloba form is unusual too. On Phu Quoc, the plant grows on bare rocks in the shade of the rainforest where there are not any significant amounts of organic substrate! Climbing on the basalt monuments created by nature, the Alocasia clusters “look” with arrogance and indifference from above at what is happening around (Fig. 1). I managed to find large confluences of them in different parts of the island on shady mountain slopes, along the banks of small streams and rivers and in places without open water. Some specimens were blooming, and on one of the inflorescences I discovered lots of small beetles, which, most likely, took an active part in pollination of the plant (Fig. 2).

Figure 1. Alocasia longiloba on the rocky banks of the mountain stream in the Phu Quoc National Park. 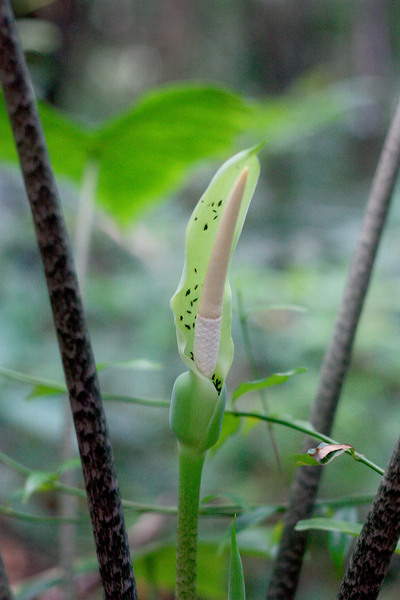 Aglaonema simplex is another inhabitant of shady forest paths (Fig. 3). At first glance, the plant can be mistaken for the shoots of a tree. Misleading is the gray color of the stem, which resembles bark. Aglaonema simplex was first described in 1837 by the German Carl Blume, and can be also found in the tropical forests almost everywhere in Southeast Asia (from Southern Myanmar and Southern China to the Philippines and the island of Sulawesi). 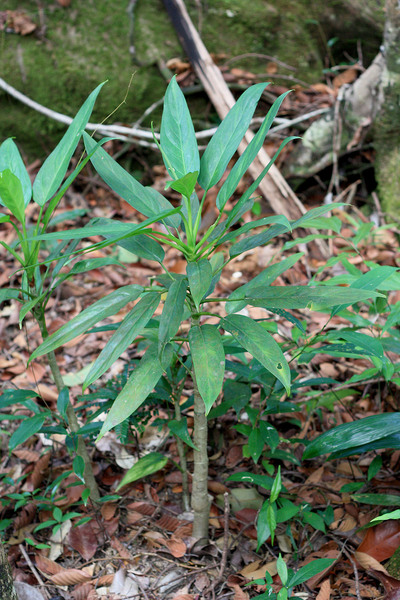 Lasia spinosa is a typical Asian cosmopolitan. In the past, I had come across Lasia on Sri Lanka and Kalimantan. On Phu Quoc, only one small specimen of this plant was found - on the bank of a stream in the Phu Quoc National Park (Fig. 4). Where it came from is not clear. It is possible that large mother plants also grow somewhere in the lower stream. 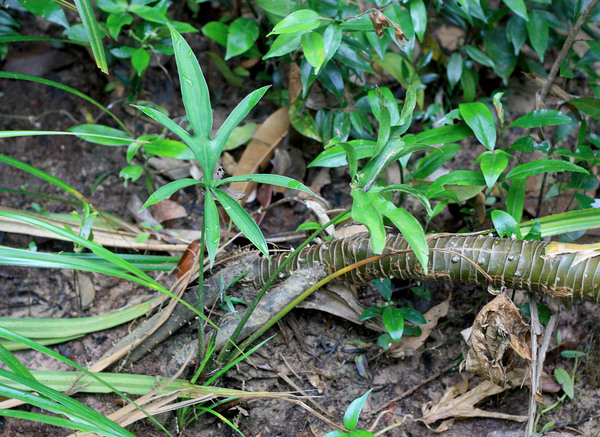 Figure 4. Small specimen of Lasia spinosa near the road crossing through the Phu Quoc National Park.

Amorphophallus sp. are tuberous aroids, which are found on Phu Quoc in forest clearings exposed to the sun, in river valleys, or at the edge of the forest (Fig. 5). Unfortunately, none of my findings were in bloom, and it is very difficult to identify the species only by leaves and fruits (the genus Amorphophallus has 197 species). As well as this, some Amorphophallus (for example, Amorphophallus konjac) could be introduced by the local people for agricultural purposes (plant tubers are edible). 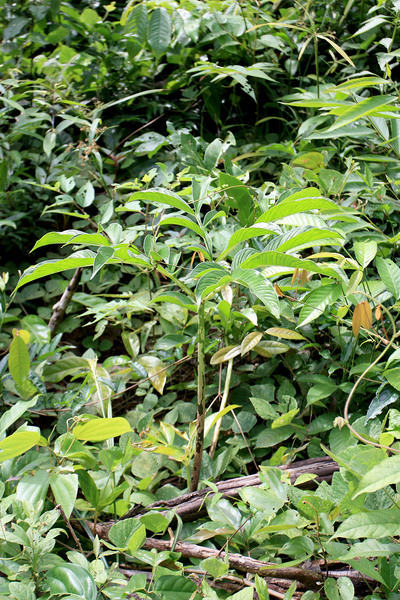 Figure 5. Amorphophallus sp. on the margin of a forest and the farm plantation.

Colocasia esculenta is an agricultural crop, that it is difficult to imagine any country in Southeast Asia without. Though its nutritional value is low, it is grown everywhere. However, on Phu Quoc, I could not find taro or tropical potatoes, as Colocasia is also called, at first dash. It happened only on the 12th day of the journey in the north of the island, near an abandoned house in the forest (Fig. 6). All the parts of taro are edible - rhizomes, leaves, petioles. 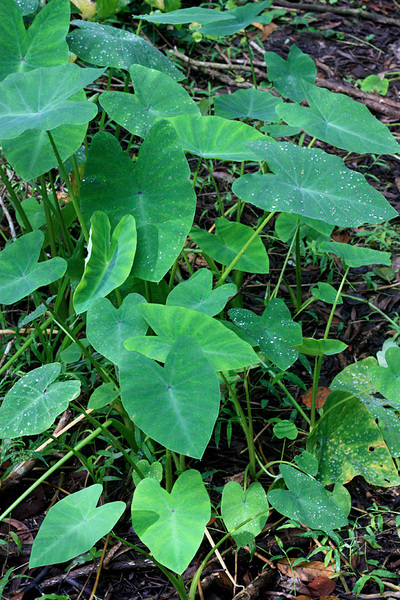 Figure 6. Introduced plants of taro near an abandoned house.

Rhaphidophora sulcata is a lanceolate vine that wrapped around tree trunks in a shady forest (Fig. 7). Some specimens also spread over stones and open plots of land. Initially, Rhaphidophora sulcata was described by the Frenchman François Gagnepain in 1941. Yes! Surprisingly, occupied by fascist troops, France continued to describe new plants! Gagnepain indicated the French protectorate of Annam (now Central Vietnam) as the habitat. 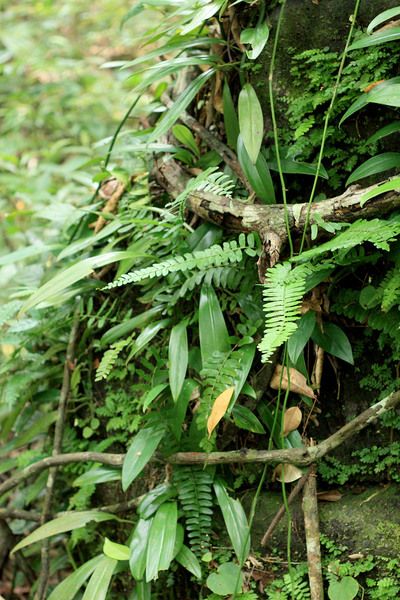 Figure 7. Rhaphidophora sulcata and ferns on the tree trunk.

Pothos kerrii – a small vine; I found it on the rocks in the shade of other vegetation. It was also described by Gagnepain in 1942 and named after the Irish physician Arthur Kerr, who passed away in the same year. Despite his medical education, Kerr became famous for his botanical research during his travels to Southeast Asia. It is worth noting here that the taxonomy of those times had a special literalism. The fact is that this species was not accepted by the international community, since Gagnepain did not give in his publicationa description of the plant in Latin. As a result, Peter Boyce did it for him almost 60 years later, in 2000. Returning to the plant itself, I have to say that Pothos kerrii is very similar to Pothos pilulifer, which is also common in Vietnam, but has a wider leaf blade. 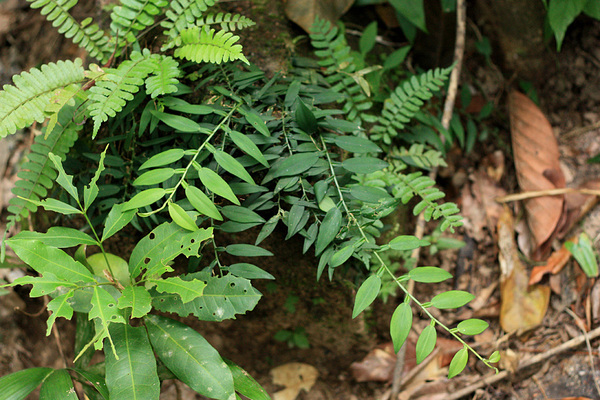 Homalomena pierreana is Phu Quoc aroids’ icon. A small plant with an elongated leaf that inhabits the stones of fast-flowing mountain rivers (Fig. 9). The shape of the leaf depends on the maturity of the plant: juvenile plants have a lanceolate lamina, adult ones–a heart-shaped, almost triangular lamina. Despite the fact that this Homalomena was described in 1912 by Adolf Engler, there has not been a single real photograph of the plant on the Internet yet–only drawings from “Das Pflanzenreich”. As its habitat, Engler indicates only the French colony Cochinchina, which at that time covered the territory of the Mekong Delta in the south of Vietnam. By the way, Homalomena is named after its collector, botanist Louis Pierre, who was in charge of Ho Chi Minh's botanical gardens in the 19th century. 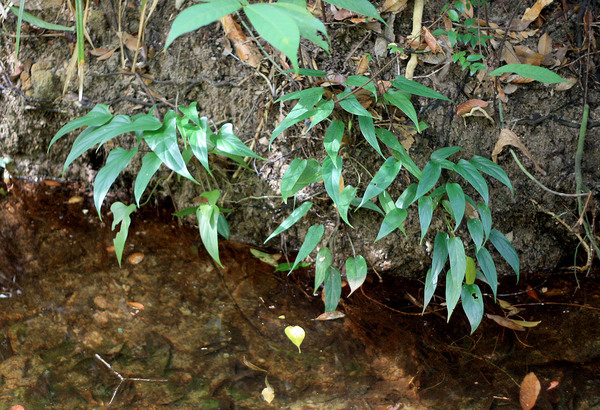 Figure 9. Homalomena pierreana on the river bank in the Phu Quoc National Park.

The literature also points at the presence of this plant in Central Vietnam (for example, in the Bach Ma National Park). Homalomena plants are of particular importance to the Vietnamese. Their tissues contain a number of biologically active terpenoids, thanks to which these plants are used to produce drugs to treat arthritis, to stimulate digestion and to relieve acute pain attacks.