I would like to devote this short story to a very pleasant and kind person - the Indonesian Welly Yansen, who suffered a huge and irreparable loss last December - he lost his beloved wife and long-awaited son at the same day. It is impossible to realize and accept, but life goes on. I will always remember our first pleasant meeting, and at this difficult moment in his life I want to express words of support and gratitude to him.

The following events took place in November 2019. My wife and I continued our journey around the island of Sumatra. We took a local flight from Medan to Pekanbaru (the capital of the Riau province). This is a large metropolis and a center for oil refineries, so we did not stay there for a long time and went by car straight from the airport to the south to cross the Equator. Our goal was the small town of Rengat, located almost on the Equator, or to be more precise, at a point about 0 degrees 22 minutes and 30 seconds south, i.e. in the southern hemisphere of our planet. The symbol of the city is the rather flavorless, slightly sour fruit, the June Plum (Spondias dulcis). Indonesians call it kedondong. But for a naturalist, the Indragiri River (Fig.1), which flows through the city and is the habitat of the Sumatran barb (Puntigrus tetrazona), is more important. 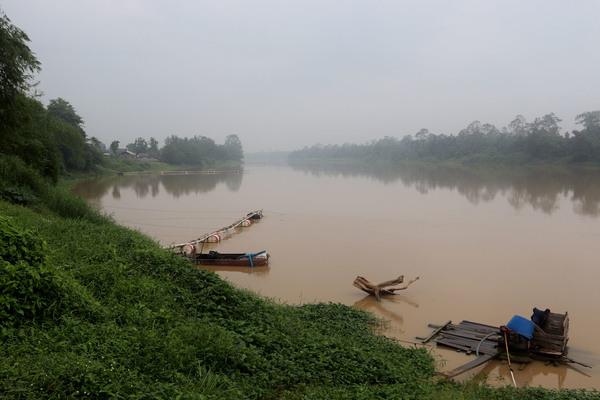 Figure 1. The Indragiri River (near city of Rengat).

Despite the experienced driver, it took us about 5 hours to travel a distance of 200 km. The traffic on the roads during working hours is huge. On the way from the oil farms to the refineries, there are trains of trucks filled with the fruits of the oil palm. Usually, the drivers cover the goods with a net, but not all do it, and sometimes it happens that giant fruits weighing up to 5 kg fall on the roadway, making it difficult for everyone else to move.

In the town, we were met by a local resident, Welly Yansen, who surrounded us with such great attention and care, which we had never seen in the countries of Southeast Asia before (Fig. 2). For the first time, I completely relied on our guide, forgetting about the daily traveler’s worries. Welly is a member of the Indonesian Cryptocoryne community and the discoverer of Cryptocoryne cordata var. wellyi that bears his name. There was no doubt that this plant would be the first Cryptocoryne that we will see in that area! 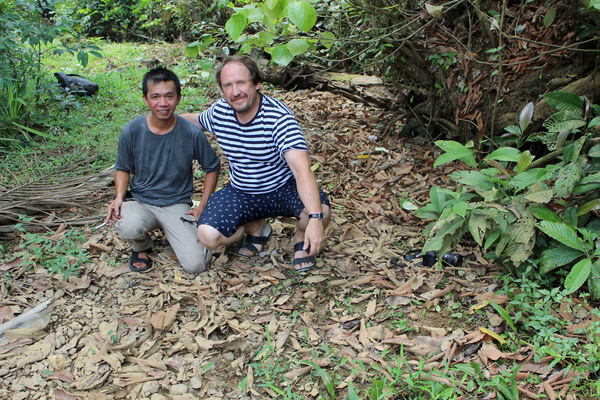 Figure 2. Welly Yansen (on the left) and author of this story in the habitat of Cryptocoryne cordata var. wellyi.

The small village of Kilan, located south of Rengat on the northern borders of the Bukit Tiga Puluh National Park, welcomed us with the hot rays of the baking sun. I didn't want to get out of the car at all. But having overcome the first heatstroke of the air, one quickly gets used to it. Cryptocoryne cordata grows here in the drainage canals of palm plantations (Fig. 3), which cross the road in several places. Unlike the northern part of the island, the rainy season had not begun in these places yet, and there was almost no water in the canals. 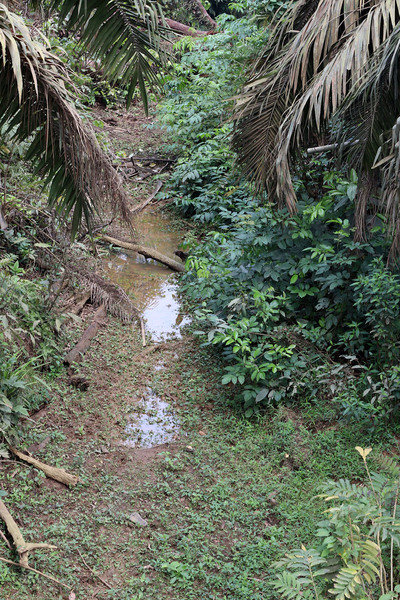 Perhaps, the end of October is the best time to observe Cryptocoryne cordata. The entire canal bed was covered with these aquatic aroids, and many of them were blooming (Fig. 4). Cryptocoryne cordata var. wellyi is very similar to the typical C. cordata var. cordata that grows on the Malay Peninsula, but three times smaller in size. The roots of the plant go deep into the clay soil, and it is very difficult to dig the plant without damaging it. Some of the plants grew underwater even during this dry period. I measured the following water parameters: pH = 5.0, TDS = 230 ppm. The latter value should be treated with caution, as the remaining puddles are not flowing and might be a concentrate which formed after the evaporation of huge amounts of water. 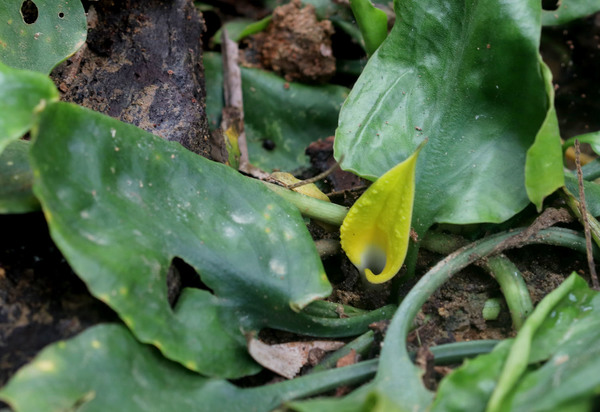 Figure 4. A flowering specimen of C. cordata var. wellyi in the canal bed.

Apart from the water fern (Ceratopteris thalictroides), a small plant of the Linderniaceae family with purple flowers (Lindernia crustacea) and the usual grass, nothing else grew in the canal. It is believed that before the palm oil industry started to develop, Cryptocoryne had grown there in small forest streams. However, the plant is not found in the nearby national park, which has preserved the local ancient rainforest.

We were about to leave, and my fellow travelers had already left the drainage canal to find shelter from the heat in our car when I decided to examine how big the population of Cryptocoryne cordata on the other side of the bridge was. There were also a lot of plants, including flowering specimens. I was leaning over one of the inflorescences when a local aborigine appeared from somewhere with a towel around his neck and looked as if he had just left the bath (Fig. 5). The first attempts to establish contact were unsuccessful because he did not speak English and I did not know Indonesian. Despite this, the Indonesian really wanted to tell me something. He also bent over the ground, plucked a leaf of Cryptocoryne and began to show with gestures how they use it in the village to heal cuts and wounds on the skin. Well, Cryptocoryne cordata in Indonesia is used in folk medicine, like we do it with plantain!

I really hope that our common passion for Cryptocoryne plants will help Welly to heal his mental wounds as well.

P.S. Trying to find out about the role of Cryptocoryne in traditional medicine, I have collected some information [1]. A few examples are listed in the table below.