It is for the last few years that a ghost of Cryptocoryne disease has been wandering among Anubias plants fanciers. Almost every aquarist has come across the problem of the plants death soon after they have been purchased. Although it was only 15 years ago when the plants were compared with plastic models and thought to be of an ideal health. What may cause such a severe attack of disease? Though I don’t have any definite answer, I will readily share the guessworks and facts I’ve learnt with the reader. 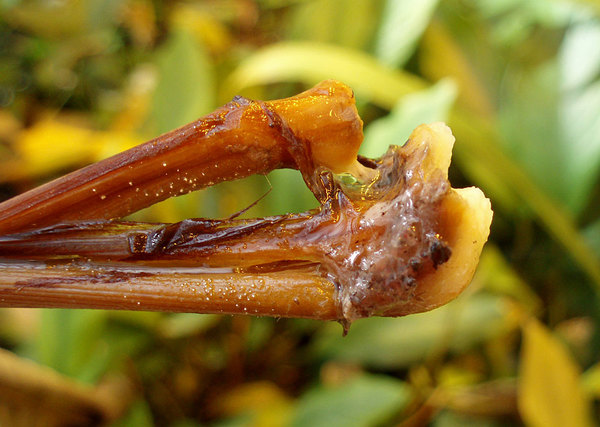 To start with, I’d mention that I’ve already have to face several types of Anubias plants disease by my experience. The first type can be recognized when rhizome and leafstalk tissues become glassy quickly and die off within 2-3 days. As a rule, the disease is preceded by some abrupt changes of the plant conditions, such as delivering, replanting, undercooling or overheating. All this can be fully applied to Cryptocoryne plants. The only difference here is that the disease affects leaf tips tissues instead of rhizome ones. The rot of tissues may start due to poisoning with ammonia which is released during the plant respiration. Sometimes it results in a complete die-off. Yet I cannot say definitely whether it is caused simply by changing the plant conditions. Thinking about the cause, I recall an incident when several dozens of Anubias afzelii bushes were completely burnt by hot water due to a break in a water pipeline. The plants lost all their leaves, but soon recovered completely as their rhizomes survived. The entire state of the initial material may be of great importance. The better conditions Anubias plants have been grown in, the more tolerant they are to different factors.

Some aquarists blame misfortune on the hothouse conditions which the sold plants have been grown in. Yet it is utterly wrong. I’ve been growing Anubias plants out of water for many years and have never faced any problems. While being transferred into a tank they have never lost a single leaf! The first difficulties have appeared after getting the plants from large hatcheries where there are many various infections. Anyway the cause has nothing to do with inorganic nutrition of the plants, since I’ve already experienced that Anubias plants grown in a hothouse and fertilized with the solution strength of 1 gram per liter can easily establish in the conditions of a usual aquarium. 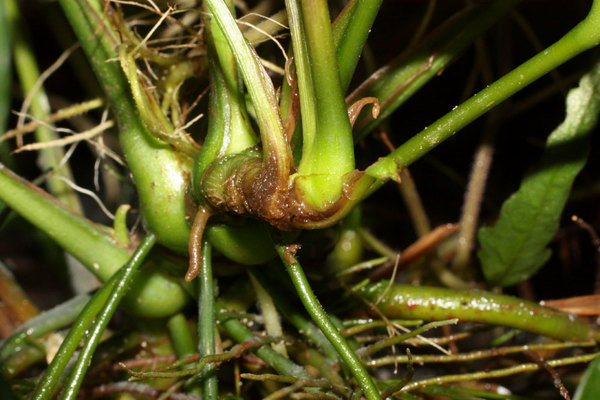 The second type of disease is called a “rhizome rot” in Russia. It is a slower ailment which can develop within years and is characterized by a spread to rhizome vessels (black spots are usually seen on a section plane). It is also a contagious disease, but its nature is not clarified completely yet, thus it can be either bacterial or fungal. It is possible that a fungal infection simply joins in the process after the rot of tissues has begun. The initial cause, however, is absolutely different. When root caps or calyptras of the plant get affected, the disease spreads further to the rhizome. Thus it is primarily important to pay attention to the root system of newly purchased Anubias plants and check it to be ideally healthy. The absence or scarcity of roots should be a sign of warning for a buyer. It should be noted that such members of the Araceae family as Cryptocoryne, Aglaonema, Homalomena and Lagenandra being kept together with an infected Anubias plant are not affected by the disease. Besides, in comparison with totally green Anubias plants, those having red leafstalks and rhizomes get afflicted very seldom due to fungicidal properties of anthocyanins creating their colour. 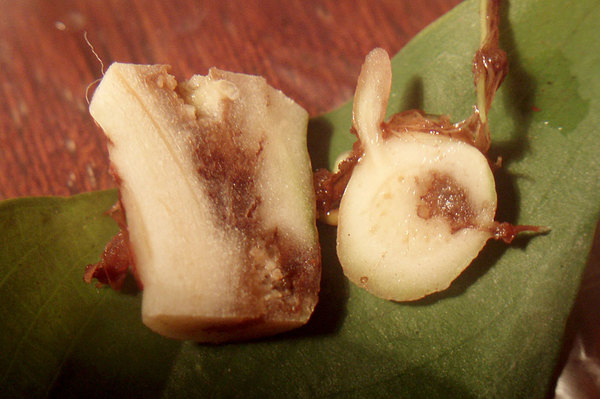 The “rhizome rot” is a more malignant disease than the first one, and it is hard to cure it once and for all with the exception of some rare cases.  Application of such contact agents and systemic drugs as fludioxonil, copper oxychloride, difenoconazole, erythromycin, and different bioprotectors cannot solve the problem completely. Besides, the treatment should be provided only if there are no hydrocoles left in water which can be killed by these drugs. Almost every antibacterial and antifungal drug mentioned above is phytotoxic and not only manages the infection, but also suppresses the plant immunity. It may take the plant a long time to make a complete recovery. Meanwhile, the infection may return after a while. Thus it is primarily important to cut off all afflicted tissues during the treatment. Just as in the first case, stronger plants are less vulnerable to the disease than others.

Besides I’ve come across such a fungus disease of Anubias plants when there appears a black rash on the plant genicula followed by affliction of the rhizome as in case of the “rhizome rot”. The disease can be managed by means of a prompt (before the release of spores) removal of afflicted leaves. 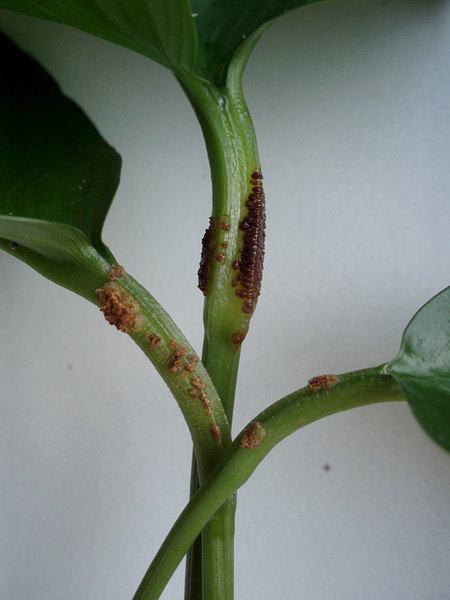 To conclude with, I would simply advise the reader to pay the closest attention to the purchased plants sold rather by reliable fanciers or suppliers.